Ever noticed how many contemporary songs have the same patterns of chords?   The order in which chords are played in a musical piece is called a chord prsogression, and it can have a profound effect on the mood and power of a song.  This site is all about demonstrating various chord progressions.  It’s not attempting to explain all the theory behind chord relationships - lots of excellent resources are available already. Have a look at the List of Chord Progressions.

Why learn about progressions?

If you'd like to compose your own songs, knowing the fundamentals of chord relationships is invaluable; recognising common chord progressions alllows you to figure out the chords in a song; playing along with other musicians without always needing  to have the chords provided is fun, and a useful skill to have.

What are the common chords for a given key

Once the key of a song is established, we would commonly use a set of chords related to the notes in the diatonic scale of that key.  For each different note in the scale, we can make a triad.  With seven different notes in the scale, that makes seven triads. For the C major scale the seven notes would be C, D, E, F, G, A, B.  Starting with note C we make the triad C-E-G, then a triad with D-F-A, then E-G-B etc. Each triad is formed by skipping every second note.   Here's what we end up with for C.

Chords that work together

With the triads shown above we end up with some major, some minor chords and a diminished chord.   It's normal to number these chords using Roman Numerals, with minor chords in lower case, major chords in Upper case, and  the diminished chord in lower case.   The Nashville Numbering System applies the same number to each chord, but uses decimal numbers.  So a I vi IV V progression is expressed as 1-6m-4-5 in the Nashville system.

So when we refer to a I-IV chord progression in key of C, it's using chords C-F.  See the chart below for other keys, and later on this page, some audio exampless.  You can see eg. in the key of G, the same I-IV progression would use chords G-C. 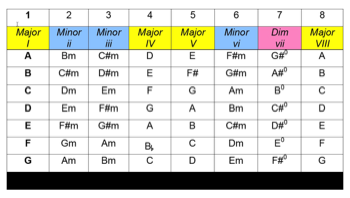 In composing and develping progressions, even though the harmonized chords listed above are commonly associated with the notes, it's OK to change a particular chord to its Minor, Major, or Dominant 7th quality, or to substitute a chord with two or more notes in common with the original chord.

The Circle of Fifths is a valuable reference tool for grouping chords together for each key.

Audio Clips of  Some Common Progressions